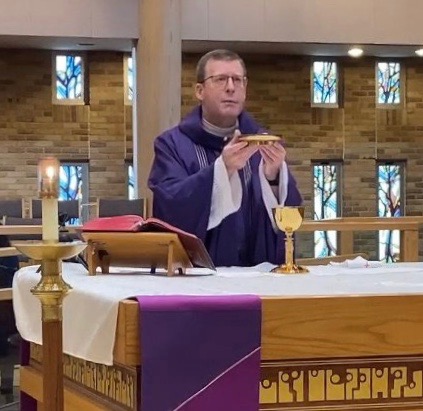 St. John Vianney Parish began in 1979 when Cardinal Dearden recognized the need for a new worship satellite of St. Lawrence Parish in the growing Shelby Township area. Mass was celebrated for twenty families at Shelby Junior High School, and later at Crissman Elementary, in those first years.

Rev. Jerome Machlik was named founding pastor of the new community and quickly became friend, shepherd, and counselor to many. The Vianney House, next to the current Church building, served as the original rectory, office, and multipurpose area. A church was constructed in the fall of 1984 on the farm owned by the Diegel family. Mr. Diegel’s dream had been that someday a church would be constructed on his property. As the parish continued to grow, a new church was completed in 1996. Today the original church that part of building that functions as our parish hall.

In 2010, upon the death of Fr. Machlik, Fr. Timothy Mazur was sent as pastor to continue our mission to give God glory in worship and by growing together as committed disciples who draw others to Jesus. Much beloved, he served faithfully here until his passing in 2021.